The South Bayfront Pedestrian Bicycle Bridge and Horton Landing Park were opened to the Public December 3, 2021.

The South Bayfront Pedestrian Bicycle Bridge is within Horton Landing Park which is a new segment of the Emeryville Greenway.  The project provides a new route across the railroad tracks providing convenient access from central Emeryville to the Bay Street Center and other businesses west of the railroad. The project improves access to the Bay Trail to the west. The project includes ramps and stairs connecting the bridge to paths to existing or proposed projects. On the west side, it will connect to Ohlone Way and the Bay Street parking garage. On the east side, it connects to the Horton Landing Park.

The main span consists of an steel S-curved deck across the railroad tracks, about 230 feet long, supported at its ends by reinforced concrete bents and keep the span elevated over the railroad yard ground. The span is supported between the bents by a straight bowstring truss/arch that extends diagonally across the deck frame.  The truss/arch consists of a pair of steel tubes, from which cables connect it to the deck framing.  A concrete slab traveled way, with fencing and lighting, is attached to the steel deck framing providing the path between Horton Street and Ohlone Way.

The project received funding support from the Alameda County Transportation Commission’s Measure B program as well as from the Bay Area Air Quality Management District’s Transportation Fund for Clean Air.  The City is grateful for this support. 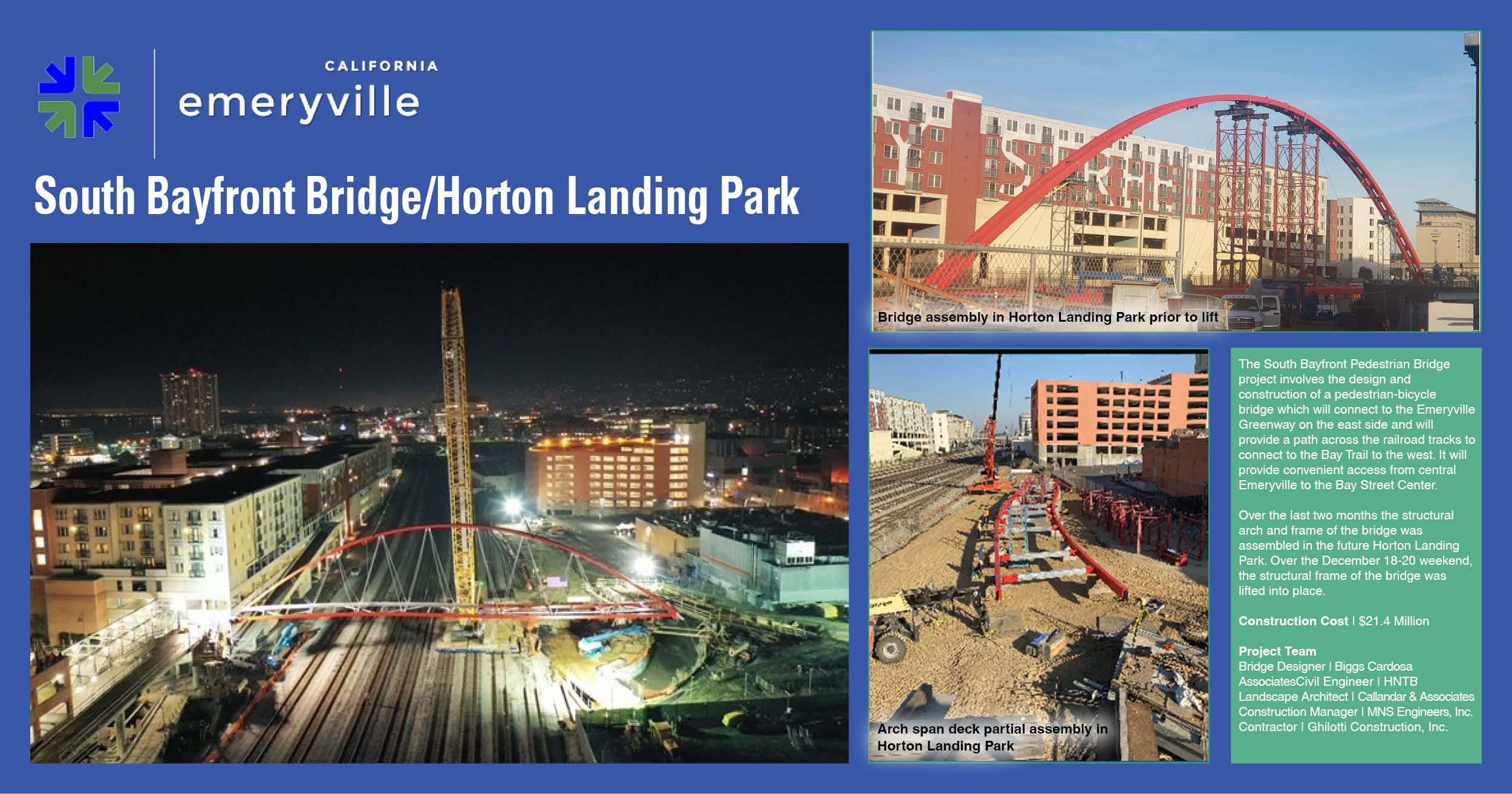 The project was substantially complete in mid November 2021 and was opened to the Public on December 3, 2021.  Physical construction work commenced on January 6, 2020.  An exciting moment of construction was the placement of the arch span over the Union Pacific Railroad yard.  Over the December 18-20, 2020 weekend, the structural frame of the bridge was lifted into place. Here is a time lapse video of the move:

Due to constraints of working over an active railway corridor the bridge was assembled outside of the Union Pacific Right of Way and lifted into place over the tracks. The bridge lift is a delicate operation and requires significant preparation to prepare and perform the lift. Operation to complete this activity culminated in a 3-day continuous effort working 24 hours a day to ensure a safe and efficient operation with minimal impact to train operations.

This project occurred through the COVID-19 Pandemic shelter-in-place orders. The City and the Contractor worked together to conform to the latest Health Orders issued by Alameda County and the State of California to minimize infection risks to workers, residents, and the general public.

The pandemic has impacted the project in supply chain delays. The contractor and the City have worked together to minimize delays through schedule and sequence of work modifications.

The new Horton Landing Park is a new addition to the Emeryville Greenway. Pathways in the park will connect the bridge to Horton Street at two locations: south of 53rd St and near Stanford Ave. The Greenway within Horton Landing Park will connect to a future greenway segment will be built as part of “The Emery” multifamily home site at the former Sherwin Williams Paint site.  The Emery is being built by Lennar Multifamily Corporation, associated with Lennar Homes and will extend southward to Sherwin near Halleck Street. 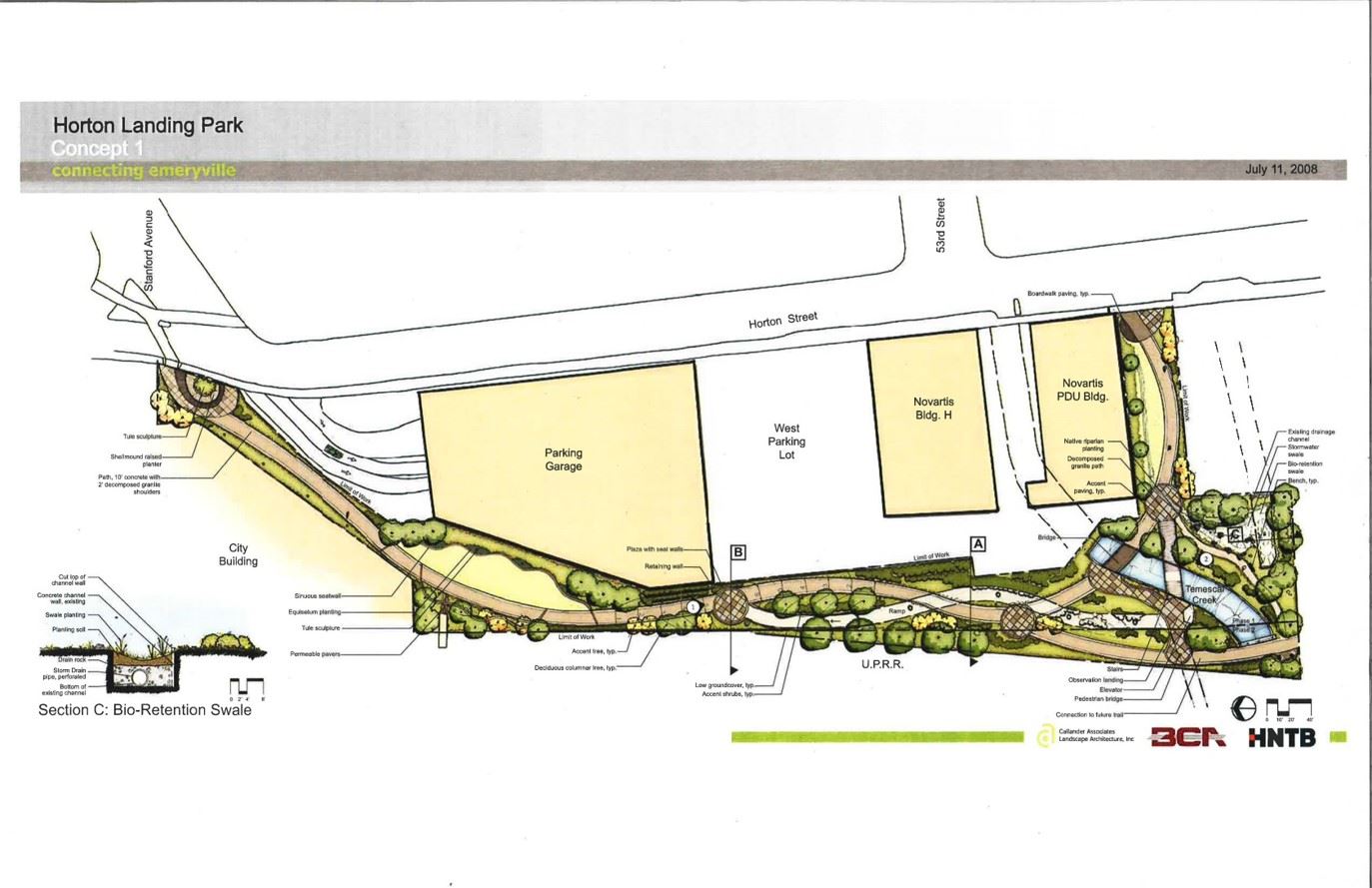 On behalf of the City Council, City Manager and City Staff, we wish to acknowledge and thank the community of Emeryville for your support and accommodation of this complex construction. The support and partnership of BayStreet (Center Cal, Bay Street Partners, and Madison-Marquette) and BioMed Realty, and Grifols have been key to accommodating access to perform the work necessary to deliver this project. IKEA also provided support allowing secondary access to the West side of the project.  Thanks to the dozens of technical and construction consultants who have worked for years to design and bring to life this signature structure in Emeryville.